While many Americans seem to have lost much hope when it comes to the Trump/Russia investigations taking place in both the House and the Senate, a new move by the Senate Judiciary Committee 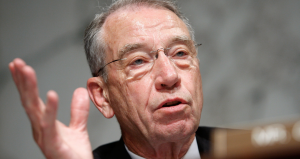 may challenge that line of thinking. The committee, led by Chuck Grassley, who many have complained has been playing partisan politics rather than thoroughly investigating the Trump campaign’s possible collusion with Russia, has just sought key financial records of 40 individuals.

While the request by Grassley and fellow Judiciary Committee members seems like a push in the right direction, it is important to note that many of the names included in their list are people connected to the Steele Dossier and Fusion GPS. The committee is requesting from the Treasury Department’s Financial Crimes Enforcement Network (FinCEN) any data related to suspicious transactions made by any of these individuals between January 2015 to the present. The list includes the following individuals and entities:

As you can see, this investigation seems to be looking into Clinton’s role in the dossier just as much as it is looking into those individuals who attended the June 2016 meeting at Trump Tower.

Regardless of what the Senate Judiciary Committee stumbles upon, I think it’s safe to say that Robert Mueller and his team are likely many steps ahead of them already. Let’s hear your thoughts on this story in the comments section below.